What is Diabetic Retinopathy? 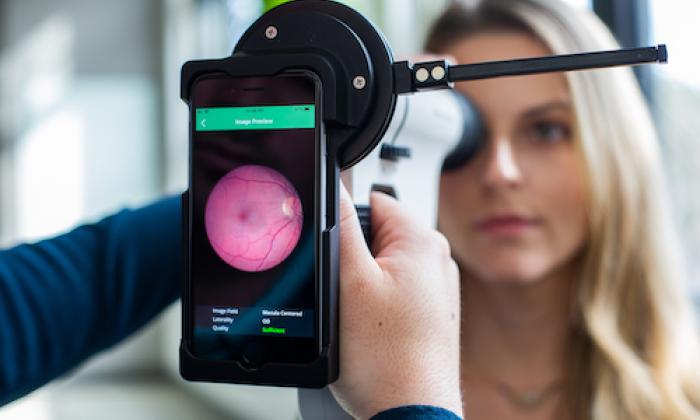 Dr. Ron Gross is a board-certified ophthalmologist. His areas of interest include eye disease screening and population health. He currently serves as Chief Medical Officer for IRIS and plays an integral role in building the reading center platform, quality assurance, clinical trials and research projects, working closely with the product and business development teams. Prior to joining IRIS, he served on the IRIS Board of Advisors and was also an IRIS customer. He served as chairman of the Department of Ophthalmology and Director of the WVU Eye Institute from 2013 through 2018 and helped bring the IRIS solution to their rural primary care clinics.

Read on to learn more about diabetic retinopathy and how it affects vision as explained by Dr. Gross!

What is Diabetic Retinopathy?

Diabetic retinopathy (DR) is an eye condition that can cause vision loss and blindness in people who have diabetes. Diabetes affects blood vessels in the retina, the light-sensitive layer of tissue in the back of the eye, initially causing them to leak blood and fluid.

How does diabetic retinopathy affect vision?

The early stages of diabetic retinopathy usually don’t have any symptoms and many people are unaware of the problem. Some people notice changes in their vision, like trouble reading, or seeing faraway objects. Over time, about half of people with diabetic retinopathy will develop swelling in the macula, the part of the retina responsible for reading vision, when blood vessels in the retina leak fluid.

Their vision will become blurry because of the extra fluid (vision-threatening diabetic retinopathy -VTDR). In later stages of the disease, blood vessels in the retina grow (proliferative diabetic retinopathy) and start to bleed into the vitreous, the gel-like fluid in the center of the eye. If this happens, they may see dark, floating spots or streaks that look like cobwebs.

Sometimes, the spots clear up on their own — but it’s important to get treatment right away. Without treatment, the bleeding can happen again, get worse, or cause scarring leading to blindness.

The benefits of early detection

Early identification of diabetic retinopathy has been shown to preserve or improve vision. Specifically, a patient with diabetic retinopathy is 25 times as likely as the general population to develop blindness, representing the number one cause of blindness among working-age Americans. With treatment, however, this risk of vision loss is significantly reduced to less than 10%.

The recommendation of the American Diabetes Association of a yearly retina examination by an eye doctor has resulted in fewer than half (42%) of people at greatest risk for visual impairment (people with diabetes, people over 65 years, people with eye problems) being examined.

To address this problem, telemedicine represents an efficient, reliable, and cost-effective retinal screening and diagnostic process that enables remote and timely consultations. It reduces access disparities in rural, underserved, and geographically isolated communities.  Instead of patients traveling long distances to consult experts, telemedicine leverages technology to enable remote and timely consultations, bringing services closer to those that need it.

The benefits of retinal screening in diabetes using telemedicine are well studied and documented, allowing patient assessment in a quick and accurate manner, resulting in early detection to treat preventable diseases. These advantages have been further enhanced with the availability of artificial intelligence to improve clinical decisions and outcomes. It allows for scarce resources to be used more effectively.

Visual impairment underlies some of the health outcomes most costly to human health, human capital (disability, quality of life), and to the economy. Globally, at least 2.2 billion people have visual impairment or blindness, of whom at least 1 billion could have been prevented (WHO 2019).

Visual impairment increases with older age; 1 in 6 Americans over 70 years old has some visual impairment. Extensive research has demonstrated an association that shows visual impairment among older adults significantly increases the risk of falls, risk of accidents and death, and risk of depression and suicide while and reducing the ability to live independently.

Visual impairment has an even greater impact among lower-income Americans; older Americans that live below the poverty level, experience impairment rates 50% higher than all other older adults. As the U.S. population ages, particularly among certain racial and ethnic groups, the number of Americans with visual impairment is estimated to double by 2050 (Rohit Varma, MD). Nearly 80% of blindness can be prevented or treated leading to more independence to perform daily activities, increased participation in social activities, lower rates of depression, decreased likelihood of falls and injury, and higher employment resulting from a decrease in permanent sickness and poorer general health (Rupert R A Bourne, MD).

Diabetes affects approximately 463 million adults worldwide in 2019 with an additional 374 million people at increased risk of developing diabetes. Those diagnosed are expected to rise to 700 million persons by 2045. Low- and middle-income countries are disproportionately affected (79%). Diabetes is the leading cause of death, disability, and blindness in the United States.

Health expenditure in patients with diabetes in 2019 will exceed $760 billion- 10% of the total spending on adults. Diabetes is most common in people between 40-59 years old (International Diabetes Federation). In diabetes, elevated blood glucose and lipids damage blood vessels. Increased risk of cardiovascular disease and stroke result from large vessel damage, while damage to small blood vessels damage the kidney, nerves, and the eye.

The IRIS Team works tirelessly to increase accessibility to our retinal screening solution. It is our company mission to end preventable blindness which can only be achieved by increasing access to preventative diabetic retinopathy exams.

Looking to learn more about diabetes, vision, and IRIS? Check out our blog.

To get more insights on how we can help you save eyesight, contact us!

Get started with IRIS today.

Want to know if IRIS is right for you? Schedule a one-on-one consultation with our team. We’re here to help.

How can we help you?